In a super fun and exciting race, the boy’s 400 Free Relay of Nathan Noll, Ray Fugett, Brady Bell, and Kolby Ruff shattered the state cut, got third place at a major invitational, and smashed the school record. With a time of 3:20.90, the team went well beyond their goal of making the state cut of 3:28. In an interesting turn of events, Nathan Noll, who usually anchors, led the relay with a hairsplitting 47.65 first leg. Executing a perfectly timed relay start, Ray Fugett was next in with his fastest split ever, a 50.72. The third leg, Brady Bell, who less than ten minutes earlier swam the 100 Breastroke and got a silver medal, dove in and swam his fastest split ever with a 52.99. Anchoring the relay was freshmen Kolby Ruff, who for the first time in his life broke the 50 second barrier, with a 49.54 finish, securing the team a bronze medal.

Nathan Noll, proving once again his abosolute dominance of the sport and his ability to race like no other, brought home two gold medals. One in 200 Free with a time of 1:46.20, a new school record, and another in 100 Butterfly with a time of 52.19 seconds.

Overall, the team got sixth place out of 28 teams. After three meets in one week, the team is ready for a small break before heading to the Mizzou Natatorium for the annual COMO Invite next weekend. 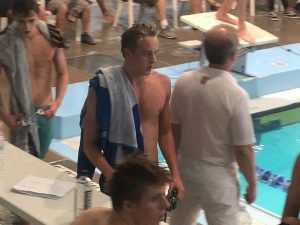